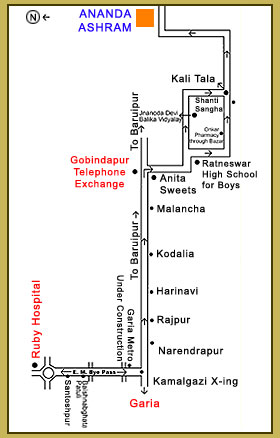 The building is nestled within an idyllic heartland in the peaceful surroundings of Gobindapur which is situated between Narendrapur and Baruipur, the District Head Quarters of South 24 Parganas. The place is approachable through 2 (two) routes :


Baruipur has now become the District Head Quarters of South 24 Parganas and commercial and business activities around the region specially in the Southern Metropolitan Bypass has increased manifold.

This has resulted in the availability of all city amenities from Ananda Ashram on a short notice.